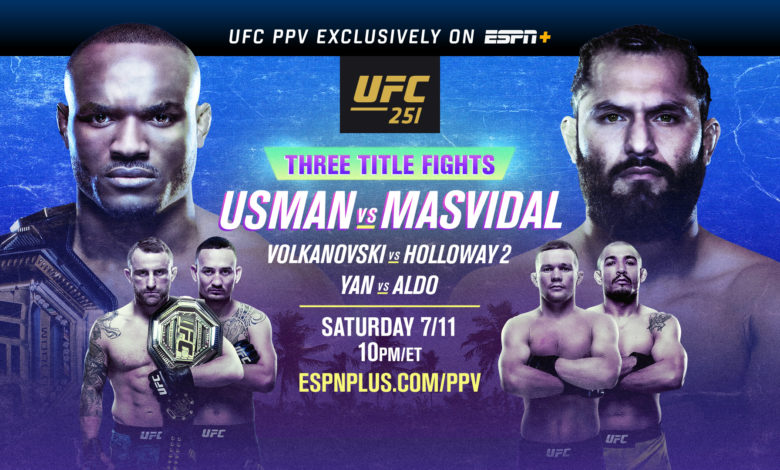 UFC 251: Usman vs Masvidal streams exclusively on ESPN+ PPV this Saturday, July 11, at 10 p.m. ET, when the Octagon travels to Yas Island, Abu Dhabi in the United Arab Emirates.  UFC 251: Usman vs Masvidal will feature three championship bouts and kicks off a series of four events from UFC FIGHT ISLAND. UFC welterweight champion Kamaru Usman, in his second title defense, faces No. 3-ranked contender and baddest in the sport, Jorge Masvidal, in the main event.  The co-main will feature a rematch between featherweight champion Alexander Volkanovski against former division champion and No. 1 contender Max Holloway.

Saturday’s coverage begins at 2 p.m. ET, with a live one-hour UFC Live: Usman vs. Masvidal Pre-Show on ABC.  Live coverage continues at 6 p.m. ET, with the prelims on ESPN, ESPN Deportes (Spanish), and ESPN+ (English, Spanish).  On Friday, UFC Live will air on ESPN at 8 p.m. ET, providing fans with exclusive insights and views on the biggest stories heading into UFC 251.

Usman (16-1-0), who has been unbeaten for over seven years, enters the Octagon for his second title defense, following a dominant win over rival and former interim UFC welterweight champion Colby Covington.  He captured the welterweight title March of last year after defeating Tyron Woodley by unanimous decision in the UFC 235 co-main event.

Masvidal (35-13-0), considered one of the best in the sport, will challenge for the UFC title for the first time in his career, stepping in on short notice to replace No. 1 contender Gilbert Burns, who tested positive for COVID-19. The Miami native had a spectacular year in 2019, with stunning wins against Nate Diaz at UFC 244, and Ben Askren at UFC 239, where he defeated Askren by scoring the fastest KO in UFC history with a flying knee, along with a KO victory over former UFC welterweight title challenger Darren Till in the main event of UFC London.

UFC featherweight champion Alexander Volkanovski (21-1-0), defending his belt, squares off against former division king Max Holloway (21-5-0), who will attempt to regain his throne in a rematch of their battle at UFC 245.  In the third title fight of the night, a new UFC bantamweight champion will be crowned when Petr Yan (14-1-0), who is coming off a knockout win over UFC Hall of Famer Urijah Faber at UFC 245, faces former two-time UFC featherweight champion Jose Aldo (28-6-0) for the UFC bantamweight title vacated by Henry Cejudo following his retirement at UFC 249.

Who’s the boss? Alyssa Milano is the boss!

Who's the boss? Alyssa Milano is the boss! Why ask questions that we already know the answer to? If you